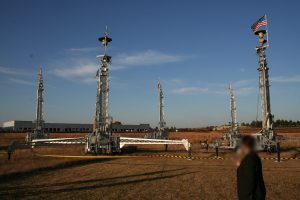 RAID (Rapid Aerostat Initial Deployment) is a highly successful rapid-response fielding of a multi-spectral transportable surveillance system. RAID was an offshoot of the JLENS Aerostat mounted radar system. During the Afghanistan war effort the Army had the Prime Contractor mount FLIR Cameras on 17M Aerostats to improve local surveillance around the operating bases. The program was successful but the Army determined that it would be useful to have the same surveillance equipment mounted on a tower system. This would make it less costly to maintain and more persistent. CFI's role in this was to help the prime identify and implement a tower mounting system. The original tower used for this system was an existing mil-spec unit originally designed for a microwave transmission system, identified as the AB1309 Antenna Mast. These Masts had several shortcomings as related to the RAID requirement.

The AB1309, while originally designed for air transport, had never been certified for air transport. The high altitudes faced in Afghanistan combined with the requirement that the masts be inserted using Chinook Helicopters created the requirement that the AB1309 be reduced in weight about 2000 lbs. In addition, the mast had to be modified to carry the payload specified under the RAID program. CFI worked with the prime to solve all these issues. Within six months the tower based version of RAID was deployed to Afghanistan and was an immediate success. Beginning with the original four units deployed, the Army quickly purchased approximately 40 more AB1309 based RAID units. CFI's role during the larger deployment was to modify the towers to meet the design changes. CFI also refurbished the masts, most of which were used and in varying states of disrepair, into like-new condition capable of reliable mission fulfillment.

The system became so popular that, upon the consumption of all available AB1309's, the Army instituted a search for a commercial replacement for the AB1309 that could be procured in large numbers to replace and supplement the AB1309. CFI assisted in research, provided structural testing services, and designed many of the support components including the specialized Guy System (required for safety, mobility and Camera stability) and the Tool Kit required for field support. Since the introduction of the modified COTS Tower, there have been more than 500 of the RAID towers fielded. CFI has been continuously involved in the production of support equipment, design and engineering of upgraded components, refurbishment of damaged units as they are cycled out of theater and Logistics activities.

The RAID System is “proven technology” with a distinguished service record in support of both Operation Enduring Freedom and Operation Iraqi Freedom. With several thousand hours of operation in hostile territory, the RAID system has maintained an operational readiness in excess of 97 percent.